Ruptured ACL, Surgery or Without Surgery?

The Anterior Cruciate Ligament (ACL) is a crucial ligament in the knee for providing stability. A ruptured ACL is when the ACL is completely torn. In years gone by, all ACL ruptures were recommended to have surgery, most commonly through a replacement via a hamstring or patallar tendon graft. This guidance has change in recent years but it is not conclusive for surgery or conservative management. . There is a growing body of evidence comparing both surgical and non-surgical options, highlighted by high profile athletes such as Tiger Woods who won 5 out of 6 tournaments before having a surgical repair and some case studies on Premier League players who are currently playing without an ACL after an 8 intensive week rehab protocol (Weiler et al, 2015). 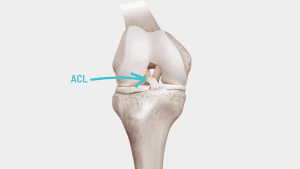 An important aspect in all of this is whether you have an unstable knee, meaning does it give way. If it does give way, and you decide to ‘wait and see’ or for a non-surgical approach, that then you increase your risk of a meniscus tear. Without surgery is thought to be associated with the early onset of arthritis, especially in the young adult (Roos, 2005). However, the evidence is mixed. Moksnes et al (2013) would suggest there is no difference between surgical and non-surgical in a 5-year follow-up. It’s felt that we need longer follow-up times here before we can reach a conclusive decision.

For those who opt for ACL surgery, there are a few things to keep in mind. There are risks such as deep vein thrombosis (DVT), infection, graft failure. It is also important to remember that this is something that isn’t as well known; only 63% of surgical patients return to pre-injury level and 44% return to competitive sport (Arden et al, 2011). Fear of re-injury is seen as one of the most common reasons for this low number (Flanigan et al, 2013).

So what should you do?

Answering this is difficult and is individual to each case, however, we would recommend following the advice provided by the BOA Blue Book for ACL injuries which states:

In simple terms, if you encounter regular giving way or instability and you wish to return to sport that involves pivoting at speed, ACL surgery is recommended. If you don’t have an unstable knee, comprehensive rehabilitation, without surgery, guided by a Sports Physiotherapist is a good option.

We recommend that you receive an official diagnosis from a medical professional before thinking about your options as there are numerous conditions that have a similar presentation to an ACL Rupture.