What is IT Band Syndrome

What is the IT band Syndrome (ITBS)?

The Iliotibial Band is a very strong structure which is confusing as it is not definitively a tendon, ligament, or a dense fibrous connective tissue like plantar fascia. In reality, it is all three. It is a tendon by definition because it connects a muscle, the tensor fascia lata, to the bone. It is a ligament because it connects bone to bone and limits unwanted movement to provide stability. And it is made of dense fibrous connective tissue. When this structure becomes irritated it is called IT Band Syndrome.

The ITB is not only connected directly to the bone but also to the surrounding muscles via further connective tissue. It connects to the gluteus maximus, quadriceps muscles, hamstring muscles, gastrocnemius muscles, and connective tissue around the outer side of the patella (knee cap). So the condition of all of these muscles can have an impact on the compressive forces of the ITB.

Iliotibial band pain is a knee injury that usually develops quickly during or after a particular activity such as running. It is a very common cause of knee pain. The symptoms of iliotibial band syndrome are usually felt initially as a sharp pain on the outside of the knee that will often worsen if the activity is continued.

The bony prominence on the outer thigh just above the knee is where symptoms are most commonly felt. It is at this point that the ITB can get compressed against the knee fat pad on the outer side of the knee joint. With the highest compression when the knee is bent to 20-30 degrees. 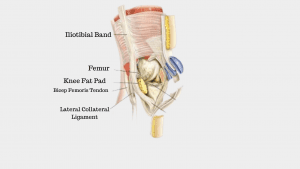 There is a small fat pad that sits between the ITB and this bony prominence to protect the soft tissue from the hard bone. It is this structure that becomes painful and inflamed with repeated compression, not the ITB that is actually causing pain.

ITB syndrome is an overuse injury and is very common in runners. However, it can occur after excessive or unusual downhill walking and occasionally you can get Iliotibial band syndrome cycling. It can usually be linked with a change of type of exercise, intensity, or volume.

IT band Syndrome: Exercises to avoid

If you have high levels of pain, try to avoid strengthening exercises with a lot of knee bending such as squats, lunges, and box jumps.

In the initial stages, it is sensible to avoid lateral exercises such as a cross-over squat, lateral lunges, and side step-ups.

If you only get pain when running, ideally you shouldn’t stop running completely but reduce your running speed and/or volume.

How to massage IT Band Syndrome?

As discussed earlier, the IT Band is an extremely strong structure. It is not possible to stretch your IT Band with a massage. Due to its connection to all surrounding muscles, massaging them can be helpful. In some cases, we recommend a deep tissue massage to the quadriceps muscles, calf muscles, gluteal muscles, and hamstring muscles.

Self-massage for IT Band Syndrome can be helpful by using a foam roller for 2-3 minutes on each of the surrounding muscles. This should be followed by stretching these muscles for maximum pain relief.

We recommend that you receive an official diagnosis before trying any of the above as there are numerous conditions that have a similar presentation to IT Band Syndrome.