What is Pes Anserine Bursitis?

The Pes Anserine, from the Latin “goose’s foot”, is a robust structure that combines the tendons of three different muscles. These are the sartorius, Gracilis, and semitendinosus tendons. It is a superficial structure that can be palpated in the inner part of the knee, just below the joint line.

To prevent excessive stress on the Pes Anserine, a bursa lays between the tendinous insertion and the bony part of the knee joint. However, if an excessive amount of stress is placed on the area, also the bursa may become sensitive and inflamed, hence the term Pes Anserine bursitis.

What is the function of the Pes Anserine Bursa?

The main function of the Pes Anserine is to provide dynamic stability of the knee joint, particularly to those forces that push the knee to fall inside (namely valgus forces). These are common forces encountered in activities such as running, cycling and swimming (particularly breaststroking). The function of the Pes Anserine bursa instead is to reduce shear forces between the tendons and the bony portion of the knee. 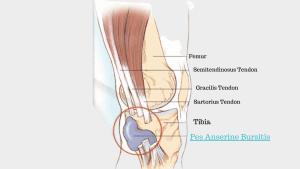 Generally, an overload is responsible for the symptoms of Pes Anserine Bursitis. The overload may sensitise the tendons and thus cause Pes Anserine tendonitis, with common features such as pain before or after exercising and morning stiffness.

In more irritable cases, the bursa could also become sensitised and inflamed, with common symptoms such as night pain and pain at rest. Also, it is not uncommon to see some puffiness in the inner knee, likely related to swelling of the bursa. This is what is normally called Pes Anserinus bursitis.

As a general example, an over-pronated foot may cause your knee to fall inside, which in the long run could sensitise the inner structures as the bursa or the Pes Anserine. Exercise therapy and orthotics may be a solution in this case.

What other structures can cause inner knee pain?

There are several other structures that could mimic the presentation of inner knee pain. The likely diagnosis may also be dependant on your age. In particular:

At the initial stage of bursitis or tendinopathy, pain management strategies are mainly based on ice, taping, and relative rest from those provoking activities that caused the symptoms to develop. Non-steroidal anti-inflammatory medications may also have a role in the initial stages.

In terms of physical therapy, activity modification combined with simple exercises without knee involvement are preferred, to allow muscle contractions of the hamstring muscle and the quadriceps without irritating inner knee structures.

Finally, as explained previously, for long-term results the biomechanical causes of the injury need to be addressed as well, as in an over-pronating foot.

Should physiotherapy fail to address your symptoms, the second line of treatment is generally an injection of anesthetic (corticosteroid and/or lidocaine).

We recommend that you receive an official diagnosis before trying any of the above as there are numerous conditions that have a similar presentation to Pes Anserine Bursitis.